Does anyone read the early readers/step into reading books featuring Barbie? Recently they've begun to adapt the Barbie Life in the Dreamhouse episodes as step into reading comic readers, and they use all images from the web show.

This one, Too Many Puppies, is based on the episode Plethora of Puppies, one of my favorites because we see her career outfits, especially her vet outfit. 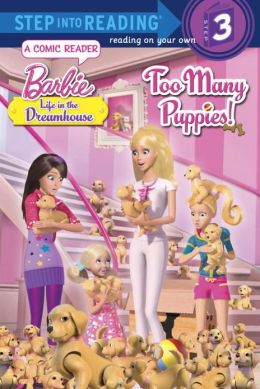 hey there!! i'm emily. i'm a freshman in high school and i've been watching the barbie movies for forever - my first ones were Swan Lake and The Nutcracker, and my favorites are Three Musketeers, Diamond Castle, 12 Dancing Princesses, Pink Shoes, and Princess and the Pauper. besides barbie i'm really into musical theatre, especially les mis, and i'm a ballet dancer and theater actress person; right now i'm in a ballet adaptation of Beauty and the Beast as a Bimbette as well as playing a merry murderess in Chicago at my high school! i'm super excited to be a part of the community!!

The cover from the Barbie: The Pearl Princess movie. 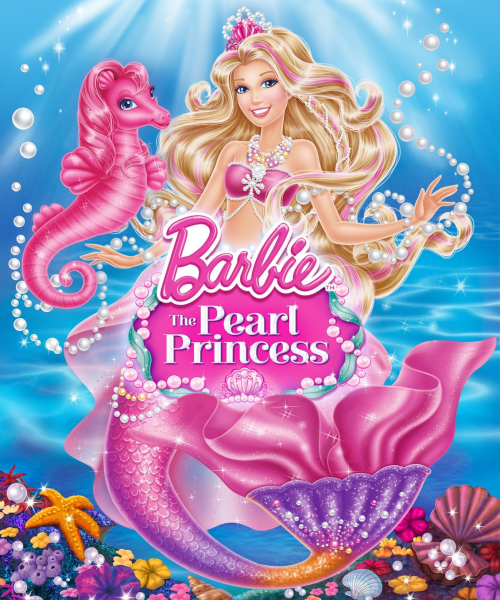 Interesting article on Yahoo!: Why Americans Have Stopped Buying Barbie 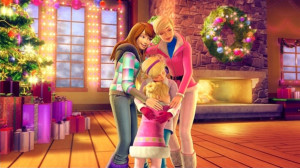 Did anyone give or receive anything Barbie-related?

So out of boredom I randomly typed "Barbie costume" into Etsy today, now unsurprisingly there was a lot of rubbish but I did find some goodies. I stumbled upon a shop full of foofy, frilly costumes for little girls, some of which were inspired by Barbie! Now some were better than others (for some reason the shop owner loves photographing the dresses with fairy wings...) and here are some of what I consider to be the best ones:

Oh and in another shop I found this, which in blue could make a pretty mean Erika costume
http://www.etsy.com/uk/listing/56981188/custom-18th-century-costume-dress?ref=shop_home_feat

So anyone else found something cool Barbie inspired on their web travels?

Hey guys, so I just joined your community today, and I'm super excited! I actually discovered it years and years ago and I've periodically checked it in order to update myself on new movie releases, but I finally decided that it was high time I make an account and join the community myself :) I am currently a high school junior, and I've been in love with the Barbie movies since I was in elementary school. My favorite is Princess and the Pauper -- I absolutely love the songs and the characters and everything -- but I also love Fairytopia, 12 Dancing Princesses, Island Princess, and Three Musketeers. Some of the newer ones are not so great in my opinion, but I love the direction they've been taking with movies like Pink Shoes. So, yeah! Besides being part of the Barbie fandom, I'm also a huge Kpop fan, and I like anime as well (speaking of which, has anyone watched the Boys Over Flowers anime? Kelly Sheridan voices the main character!!). And....ummm...I guess I'm just super excited to be a part of this community in general! Thanks for having me!

The newest Barbie DVD, Barbie and Her Sisters in a Pony Tale, has been released recently. Does anyone know if there is a page on the official barbie.com website dedicated to A Pony Tale? 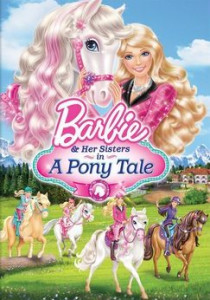 Also while looking through the site I noticed they have some games featuring some of the older movies! 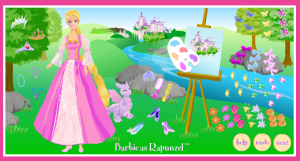 Hello there! I'm new to this community. I remember seeing it online around last year, and I really wanted to join it, but never actually did until this year.
Anyways, I'm 13 years old and have been watching Barbie movies since, like, ever! I think my very first Barbie movie was the Magic of Pegasus, which I got when I 5. It even came with the 3D glasses! Or... perhaps I watched them before that... It's been so long, I'm not sure! I have had every single Barbie movie at one point, but then I got rid of my VHS-to-DVD copy of The Nutcracker and sold my copy of Fairytopia at a garage sale a few years back.
Funny thing is is that I still have the original Gameboy Advance video games for The Magic of Pegasus and The 12 Dancing Princesses. I have yet to finish them both. Good times, man. Good times!
To me, my favorites are surprisingly not the newer ones. I think the most recent ones are very formulaic, and are becoming quite unoriginal IMO. Perhaps they will redeem itself with the Secret Door movie due out next year that I'm really hyped for! Also, no, I have yet to see the new Mariposa sequel. I always get the Barbie movies around Christmas and Easter.
Favorite Barbie Movies (as of right now):
1.Barbie in A Fairy Secret
2.Barbie in a Christmas Carol
3.Barbie and the 12 Dancing Princesses
4.Barbie in a Fashion Fairytale
5.Barbie in A Mermaid Tale
As for my other interests, I also get into anime like Puella Magi Madoka Magica and Chuunibyou Demo Koi ga Shitai, and I have this really weird passion for Once Upon a Time that I cannot explain.
So... yeah! Thanks for letting me join this website! Expect some Barbie reviews and rants coming soon!! 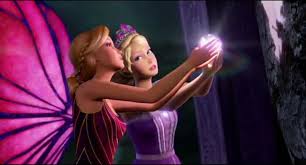 Hello, one and all. We thought we'd put up a review of Mariposa and The Fairy Princess because, well, we watched it, and no one has written anything about it yet. So here it is, but if you haven't seen it yet, be forewarned that there are plenty of spoilers. In that case, you can just skip down to the Conclusion, which is just a brief, non-spoiler-containing synopsis.

It's great to be famous, especially in Flutterfield. There’s no bad press, no paparazzi, and everybody thinks you’re the best thing since popped flutter-corn. After defeating the Skeezites and saving the world, Mariposa is enjoying her new-found status as most-admired-fairy-in-Flutterfield; not so much because of the fame but because of the fact that she gets to become curator of the Royal Library.
But there’s always a downside. You see, for many years the Butterfly fairies have been sworn enemies of the Crystal fairies (nasty, selfish, mean old Crystal fairies!), but now the queen wants Mariposa to fly to the Crystal Kingdom as an ambassador and make peace. Not that Mariposa believes all those rumors about how awful the Crystal Fairies are…but still, she’d be much happier holed up in her library - alone - than going out to a strange land and talking to strange people. So she does what anyone would do in her situation - she chickens out. But after a little more thought and a pep talk from Carlos, she gathers her resolve and flies off to do the right thing.

Pros
The movie has a plot, an intriguing story, and interesting characters. Mariposa herself is an admirable character; overcoming her fears, trying her best in adverse situations, and not blindly believing the lies that she's been told about the Crystal Fairies. The old characters don't get dumped, and their are new characters with interesting personalities (as opposed to Rayna and Rayla from the first movie, who were pretty much the same people). Carlos and Willa seem to get more screen time in the sequel. The animation is good too, a lot like Princess and the Popstar, but the colors and designs are much prettier.

Cons
The Puffballs. Every Barbie movie has an A.T.A.F (Annoying Talking Animal Friend), and this time it happens to be the Puffballs. They're fluffy, their not very bright, and they sound (oddly enough) like minions, but you just need to accept them as inevitable and move on.

Conundrums
Though there was a pretty good storyline throughout the whole movie, there was just one aspect that wasn't explained at all. That was 'Gwyllion', or 'the Gwyllion', since she was referred to either way. In Welsh mythology, a Gwyllion is a frightening female spirit or witch that haunts the twilight and shouts "Wb!". So the character likely is supposed to be 'a Gwyllion', but it's used as her name as well. Anyway, Gwyllion becomes enemies with the Crytal Fairies when she asks the king for a crystalite and he refuses to give her one, and so she flies off in a black cloud and swears revenge. She later returns and attempts to destroy all of the crystalites. When she's defeated and Catania forgives her, Catania gives her a Crystalite and Gwyllion becomes young again. But it's never explained why she becomes young and why she needs a Crystalite to do so.

Conclusion
A good movie overall, with colorful scenes, interesting characters, and Carlos. Really glad there's still a Carlos ( and Willa! No sequel-friend-dumping!). Quite possibly the best movie since Mermaid Tale.
Your thoughts?
Collapse