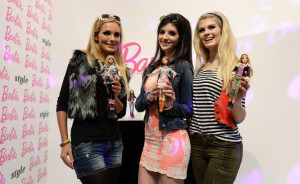 New York (AFP) - Toymaker Mattel has a problem: Barbie's performance has not been very pretty of late.
Sales of the iconic blond dolls tumbled 14 percent in the first quarter, the second straight quarter to see a double-digit decline.
Barbie's slump comes as Mattel and other toymakers contend with bloated product inventories and a cut-throat retail environment that has pinched profits and pushed toymakers into cost-cutting mode.
Mattel, reporting a quarterly loss of $11.2 million on lower sales, has slashed its inventory of toys, downsized its staff of 28,000 by 1.5 percent and employed strict data analysis to determine marketing priorities, company officials said.
Some of Mattel's other products have made up for the sag in Barbie's sales. Sales have been strong for the Thomas train toys, products linked to the movie "Frozen" and the "American Girl" line of dolls, clothes and games.
Company officials also highlight strength in important growth markets, such as China and Russia.
And Mattel is not giving up on Barbie.
In 2014, Barbie "will have a lot of news with a new look, new packaging, new campaign, new tagline, new partnerships and new ways to play," chief executive Bryan Stockton said in a statement.
"Expanding on fashion, we will launch our new Barbie Style dolls that take fashion to a new level. And we will let girls design and print out their own dresses for Barbie with the Fashion Design Maker."
Some commentators have questioned the viability of the 55-year-old Barbie line as youth gravitates towards video games and other gadgets.
But Gerrick Johnson, an analyst at BMO Capital Markets, said Barbie is in "cyclical" decline after a period of strong growth.
"The toy business is cyclical," Johnson said. "There was some improvement in the line with new Style dolls coming to market this year, but we still think Barbie is likely in about the third inning of declines." 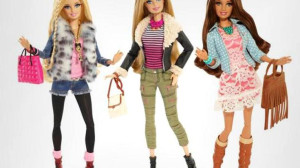 
My comments: I like how the women in the picture are kind of dressed like the dolls! That's cute.
Also I think Monster High and Ever After High are doing very well, I love all the Barbies coming out, I didn't think there was a problem with Barbie sales.
Tags: media: articles
Subscribe